"Spud the Piper is one of the wedding industry's best known characters. Couples were simply bowled over by his obvious musicianship and highly toned performance skills."

Spud the Piper is one of the wedding industry's best known characters due to his musical talent as a piper and his many appearances on national television and in the press. 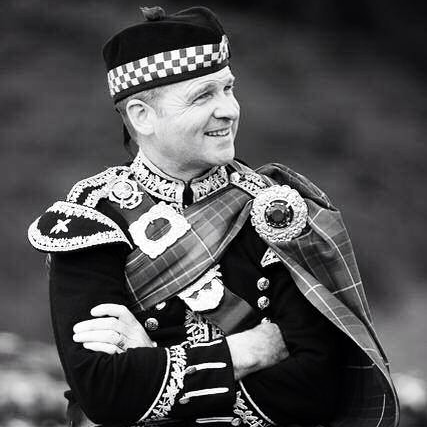 A 'Jolly' Encounter with Spud!

Spud the Piper meets Youtubers Josh and Ollie, of 'Jolly'.

Join them at Buachaille Etive Mòr, Glencoe ("no, no, we're not in Wales"), for 100% Aberdeen Angus burgers, barbequed Haggis and Orkney cheese! 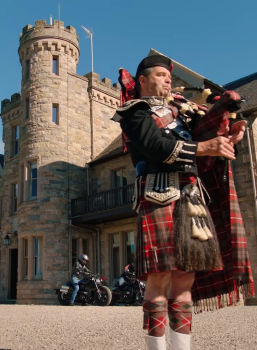 A new chapter opens in Harley-Davidson’s longest-running family, powered by the all-new Revolution Max 1250T. To call it the ultimate Sportster is an understatement. A legacy born in 1957, the Sportster has inspired racers, builders, and riders for generations. Today Sportster is reborn: delivering on a new promise of performance in a way only Harley-Davidson can do. 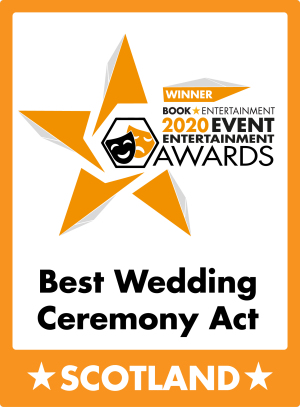 Spud the Piper is proud and excited to announce that he is a UK Best Wedding Ceremony Act Winner, at the 2020 Scottish Event Entertainment Awards.

Presented by BookEntertainment.co.uk, The Event Entertainment Awards recognises the best in the event entertainment industry across the UK. 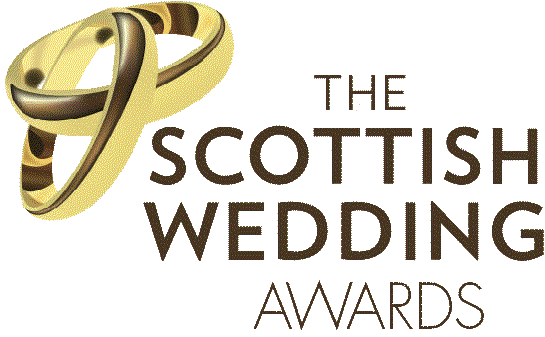 Spud the Piper is excited to announce that he has been chosen as a finalist in The Scottish Wedding Awards 2020.

Spud was also honoured to be named as a finalist at The Confetti Awards, in both the 'Best Piper' and 'Best Ceremony Entertainer' categories. 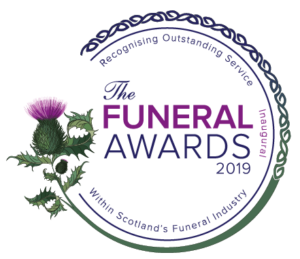 Spud the Piper is proud and honoured to be recognised as a finalist in The Funeral Awards 2019.

He has been nominated as a finalist in The Funeral Awards 'Best Piper' category.

We are Excited to Announce that Spud the Piper has been chosen by a panel of expert judges as the 'Entertainment' Category Winner at the Prestigious 'Event Entertainment Awards.'

Presented by BookEntertainment.co.uk, The Event Entertainment Awards recognises the best in the event entertainment industry across the UK. 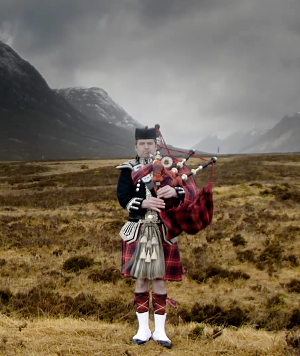 ‘The Place of the Gaels’ explores both the community and culture of winter mountaineering and climbing in the Highlands, introducing Rab's American athletes to the notorious Scottish winter.

From the climbers and skiers who live for Scottish winter to the musicians and craftspeople who make their living in the highlands, so much of Rab's inspiration still comes from the mountains of Scotland. 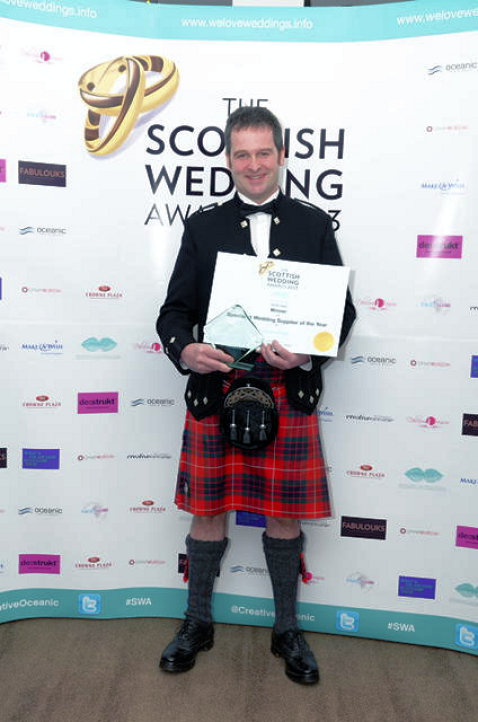 Spud the Piper announced as Finalist at The Scottish Wedding Awards 2016.

Planning a Highland Wedding or event?

No Highland wedding or special event is complete without the beautiful sound of the bagpipes to accompany your special day. click below to enquire or reserve your date now.
Check my event date

Spud the Piper Featured in BBC One Series 'The Mountain' 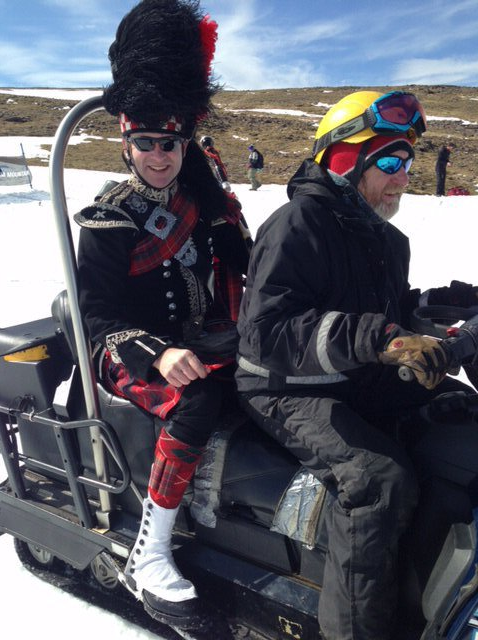 BBC One series charting life around Cairngorm, which lies at the heart of Scotland's greatest winter wilderness. 'The Mountain', features the lives and loves of 11 hardy folk who work in the Cairngorm mountains.

"Spud's father, Pipe Major Ian Fraser, was a very good piper and played for the Queens Own Cameron Highlanders, Spud followed his lead and is now a local celebrity - often greeted by people who remember him fondly from playing at their wedding. He met his wife on one such occasion and they got married in the church where they met, together they now have a son, Ewan, and Spud carries a picture of him around in the bag he keeps his pipes in."

Spud the Piper featured on front page of The Times 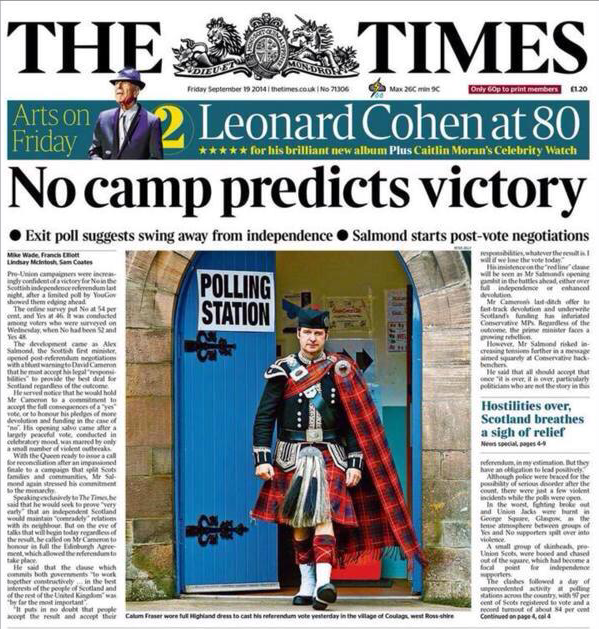 This picture was taken outside the Crown Polling Station in the heart of Inverness. It was one of the moments of my life which I'll always remember.

Voting for independence for my country held and still holds a special place in my heart. I was thrilled at getting on the front page of the times, it's not every day this happens! 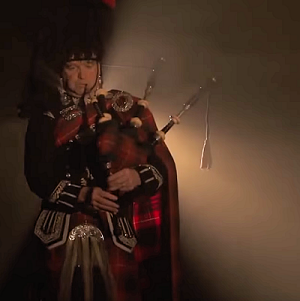 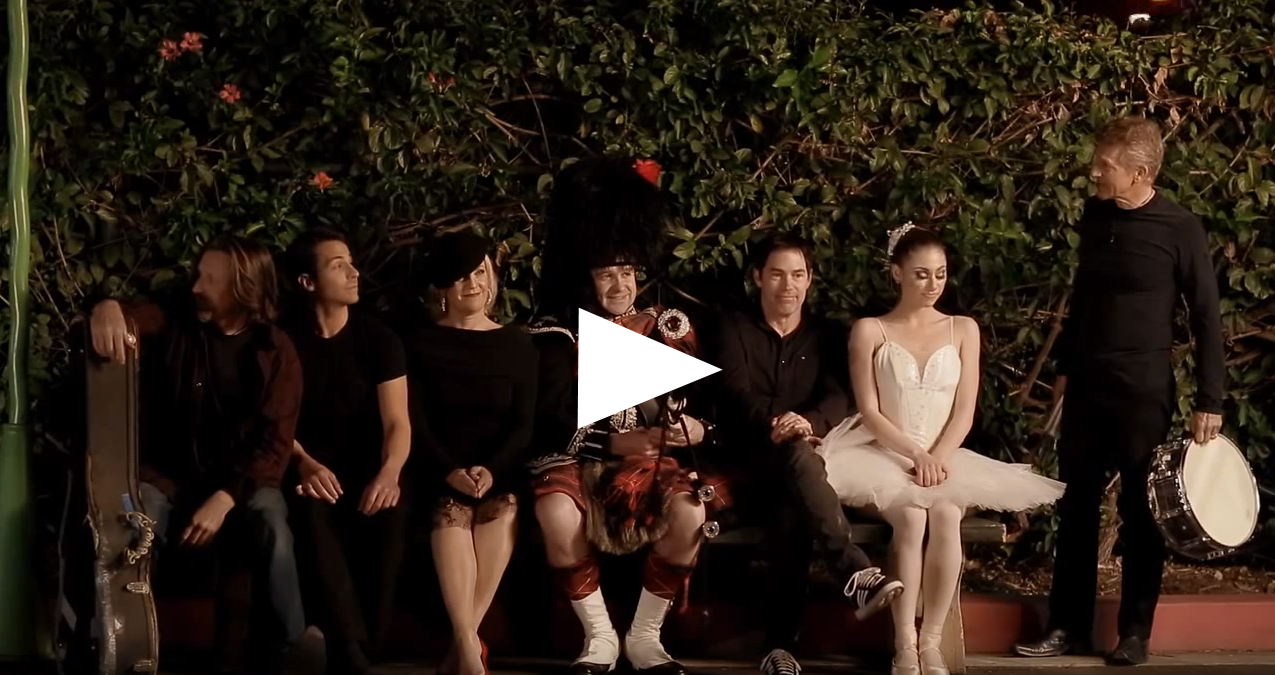 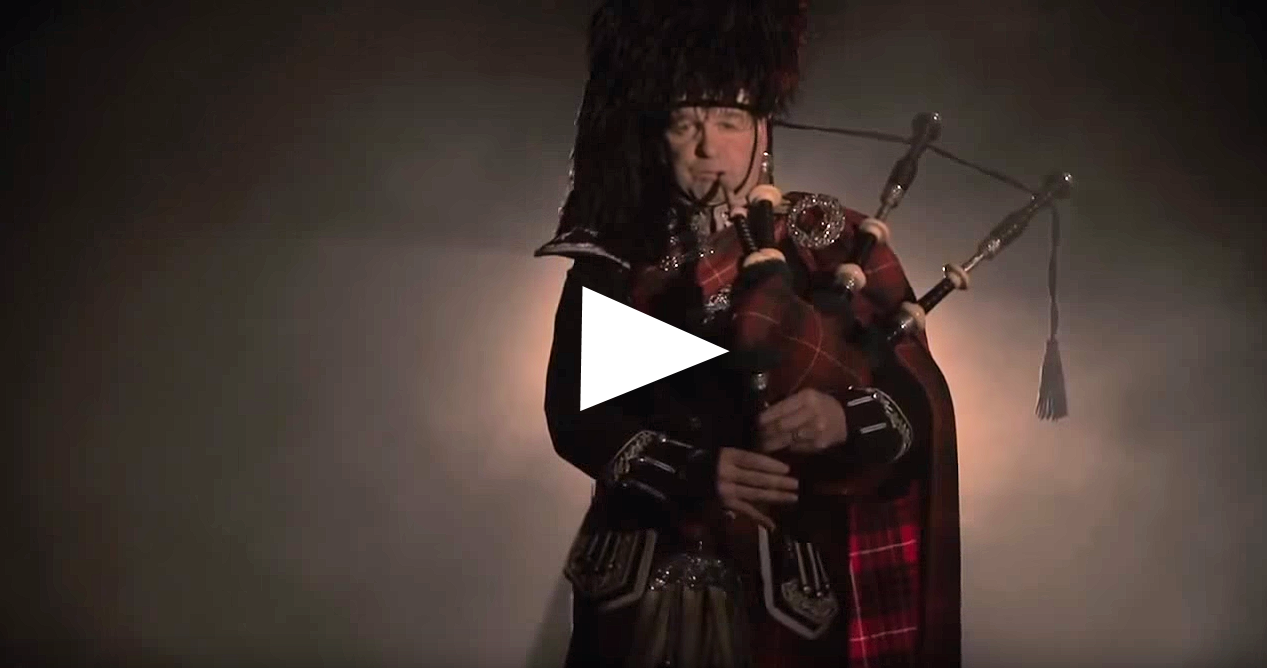 Spud the Piper plays 'Like a Virgin'
for Madonna 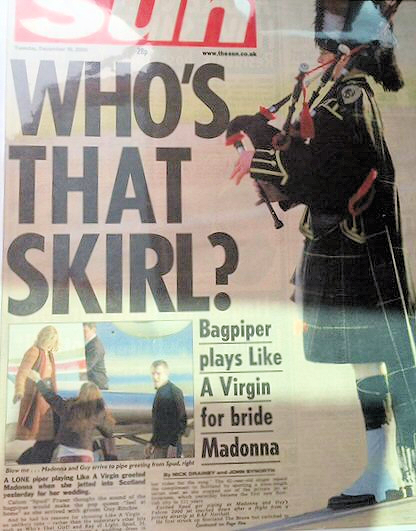 In 2000 Madonna and Guy Ritchie came to Scotland for their wedding ceremony. Peter Steinle encouraged me to pipe for her and he, along with the press, asked me to play 'Like a Virgin'  as she came down the steps of her jet. The next day I went front page of every paper known to man!

In April 2001 Madonna wrote about the experience in her biography, 'Madonna: An Intimate Biography'

Meeting Jamie lee Curtis was a fabulous occasion for me. She loved the way I speak so I ended up talking with her at a wedding in Idahoe in the western USA. We even had a dance.

The newspapers had a good time the next day!

For more news don't forget to follow Spud on your favorite social media networks below. 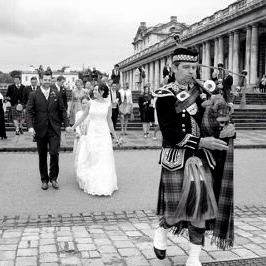